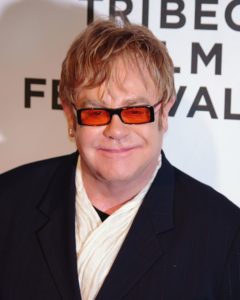 Sir Elton John is the best-selling British solo artist of the 20th century and has a fortune of $ 265 million. However, the personality of this musician is much broader than his work.

Elton John still remains one of the most stylish and outrageous artists of our time. What is worth at least his collection of sunglasses, for which he took a separate room in his house. Wigs, hypertrophied bow ties, bright shirts (Elton adores acid-pink colors), old-fashioned coats, hats with goose feathers – strange things look absolutely organic in the musician’s wardrobe. In moments of special enthusiasm, Elton John uses specially designed suits for his concerts. For example, in 1980 he addressed tens of thousands of spectators in the guise of Donald Duck.

Elton John is a quick-tempered man who never hesitated to express his thoughts openly. Because of this, during different periods of his life the musician quarreled with Madonna, Lilly Allen, George Michael, David Bowie and even Argentine President Cristina Kirchner. However, from each conflict situation, he eventually came out with dignity. For example, after years of verbal skirmishes with Madonna (which began because of the undeserved, according to Elton, “The Golden Globe”, handed to the singer for “the best soundtrack of the year”), during which Elton John called her anger “fairy strippers”, the singer found In yourself the strength to apologize. He met Madonna in a Paris cafe and sent her a note in which he admitted that such words should never have been made public. As Elton sings in one of his major hits, “The hardest thing in this life is to say the word” sorry “(Sorry Seems To Be The Hardest Word). However, he succeeds.

So, Elton John is not afraid to conflict with his colleagues, but this does not mean that he is an arrogant snob. On the contrary, the master actively follows the music scene, is friends with many young performers and constantly participates in a wide variety of collaborations that little match his own way: Elton appeared on the same stage with Lady Gaga, George Mile and Eminem, made joint recordings with a rapper Tupac Shakur, rockers Fall Out Boy and many other artists. And, with each of them he played as if he had been doing this his whole life.

The desire to make the world better

A significant part of his life, Elton John dedicates to charity. The singer pays special attention to the problem of AIDS. Shocked by the death of Freddie Mercury and the story of teenager Ryan White (the boy was HIV-infected with blood transfusions, became an outcast in his own school, and subsequently a symbol of the fight against AIDS in the US), the musician founded his own AIDS fund in 1992, Elton John AIDS Foundation. At the moment, he spent about 1 billion dollars on charity.

Incredibly, at the age of 70 Elton John still goes on a multi-month tour and gives 5-6 concerts a week. He could easily rest all day and for the sake of decency to give a concert in some “Albert Hall” once in a couple of months, as most of his colleagues do. However, the singer continues to work at a crazy pace, like a young and eternally hungry session musician. Nothing, except the love of fans and music, can not be explained. “Work saves me my whole life. I’m going to perform and record for the rest of my days. The scene is the coolest thing in the world. The tragedy happens only at a time when you do not understand how to live outside of it, “says Elton.

Elton John became one of the first Western musicians who broke through the iron curtain of the USSR and spoke for Soviet listeners. He gave as many as eight concerts in Moscow and Leningrad in 1979. The success was deafening: Elton John not only played all his major hits, but surprised the audience with a strange outfit (he wore kepi and trousers, apparently believing that Soviet people dress exactly that way) and bold antics: for example, he performed a cover version of The song Beatles – Back in the USSR, although diplomats at the embassy were convincingly asked not to do so.

Recognition of their sexual preferences, published by Elton John in the pages of The Rolling Stone in 1976, simply had no precedent in the history of pop music. Sales of his records plummeted, parents stopped sending their children to Elton’s concerts, and the press began to simply ignore the artist. Hardly worrying about what is happening, the singer even thought about the end of his career, but still managed to defend his position and in parallel become an example of sincerity for other musicians. The liberated mores of the 80’s and 90’s made Elton John almost the hero of youth. In 2005, Elton John officially formalized the marriage with his long-term partner David Furnish.

Elton John – a big fan of football, in the 80’s he became the owner of the club “Watford”. This acquisition was not just a whim of a rich man, but a fully conscious desire to be realized in a new field. Elton John was an excellent manager: with him, “Watford” in 1984 went to the final of the English Football League Cup, where, unfortunately, he lost to Everton. Neither before nor after the club did not achieve such success.

Fast Diet: Does It Make Sense?

Fast Diet: Does It Make Sense?